On September 3rd, 2016 the Skullcracker team were invited, through Steve and Beau, to attend the potlatch ceremony of Kwakwaka’wakw Chief Alan Hunt at the Tsaxis Big House, Fort Rupert. Alan, like Beau, is a master carver, dancer and singer whose work is represented by the Fazakas Gallery in Vancouver. He is of Kwakwaka’wakw and Tlingit ancestry and comes from a long line of great chiefs who fought to preserve their people’s customs and traditions. Like his mentors Wayne Alfred, Marcus Alfred, Bruce Alfred and Beau Dick, Alans work is dedicated to the promotion of Kwakwaka’wakw culture. Alan undertook an apprenticeship  with Beau between 2011 and 2017 and worked closely with Beau during Beau’s Artist-in-Residency at the UBC Department of Art History, Visual Art and Theory in his studio in the Audain Art Centre. Alan assisted Beau in the creation of his exhibition for documenta 14 (2017), which took place in Athens, Greece and Kassel, Germany. Alan is a descendant of George Hunt, Franz Boas’s advisor and lead research assistant in his ethnographic studies in the region. George Hunt’s father, Robert Hunt had worked for the Hudson Bay Company, whose main trading post was in Fort Rupert.

Steve Calvert, Gregoire Dupond, Stephanie Moran and myself were graciously allowed to document much of the 14 hour ceremony, which included the dance of the giant cannibal birds, the initiation of Chief Hunt’s brother Jaden into the Hamatsa secret society, and the dancing of several new masks recently created by Beau and Alan. This was an incredible honour for us all, to which we offer our sincerest thanks to Alan, Beau and Steve. I have recently completed an edit of the ceremony which has been passed on to Alan to use for educational purposes in the Alert Bay and Fort Rupert communities.

Below are some images and three video sequences from that day. The video sequences show the Hamsamala Dance (Dance of the Hamatsa Masks) which represents the three giant “cannibal” birds, the assistants of Baxwbakwalanuksiwé, Man-Eater-At-The-North-End-Of-The-World. They are Qoaxpoaxualanuxsiwae (Raven-of-the-North-End-of-the-World), Gelogudzayae (Crooked-Beak-of-the-Sky) and Hoxhogwaxtiwae (Hoxhok-of-the-Sky). This dance is performed at the culmination of the Hamatsa initiation ceremony. The second is a short 360° video of the opening of one of the women’s dance sequences (Alan enters the video in his regalia around 1:18). The third video is the Raven Transformation Mask Dance. This beautiful mask was created by Beau and his apprentice carvers especially for Alan’s potlatch. 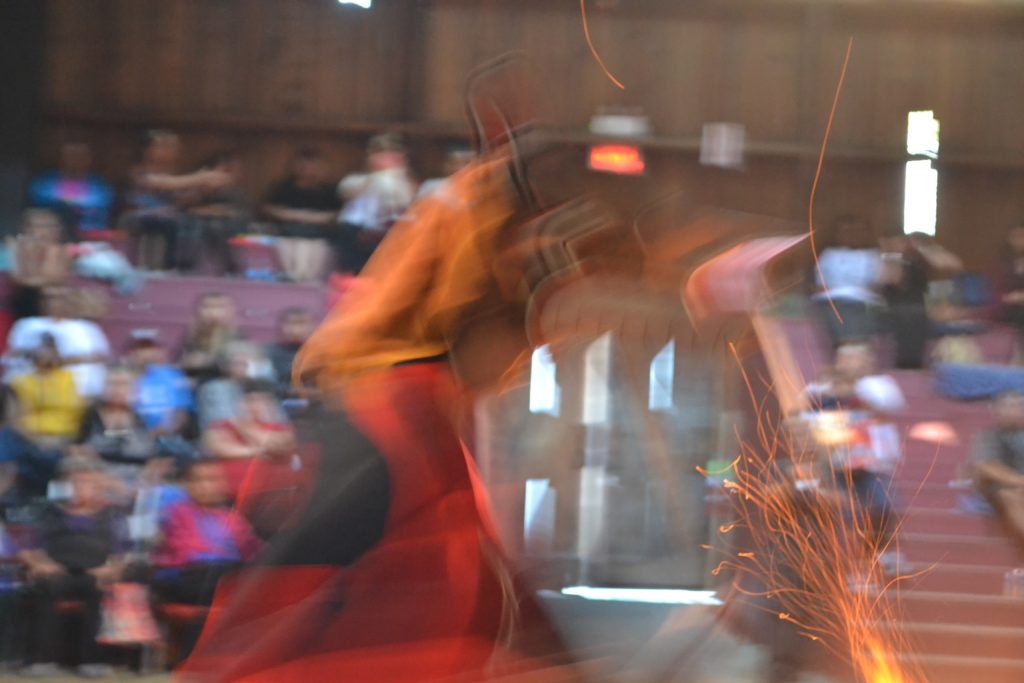 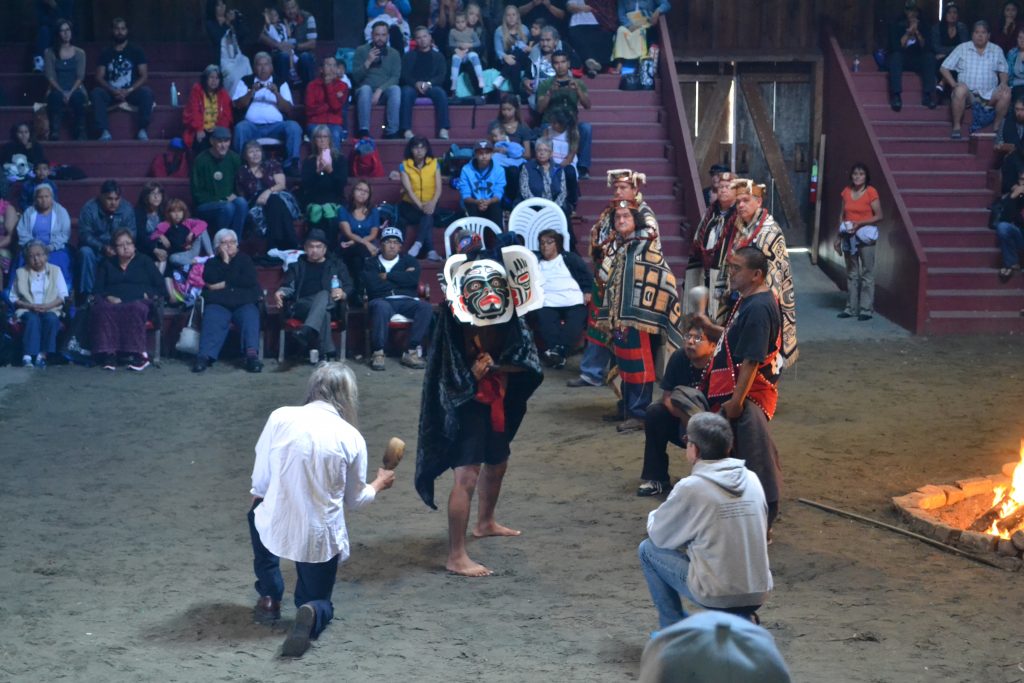 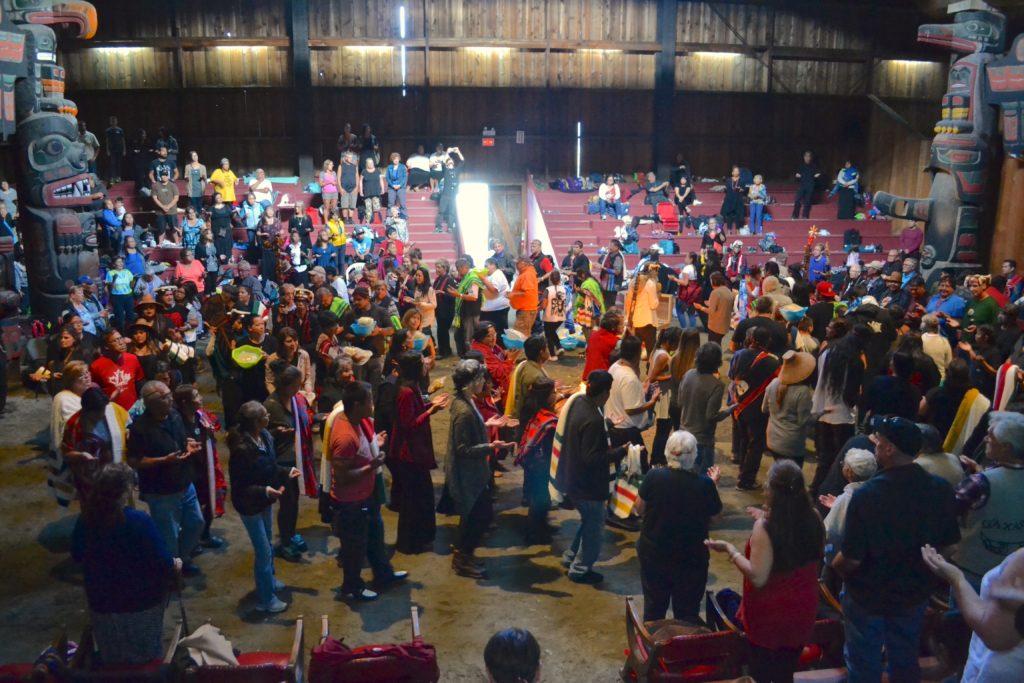 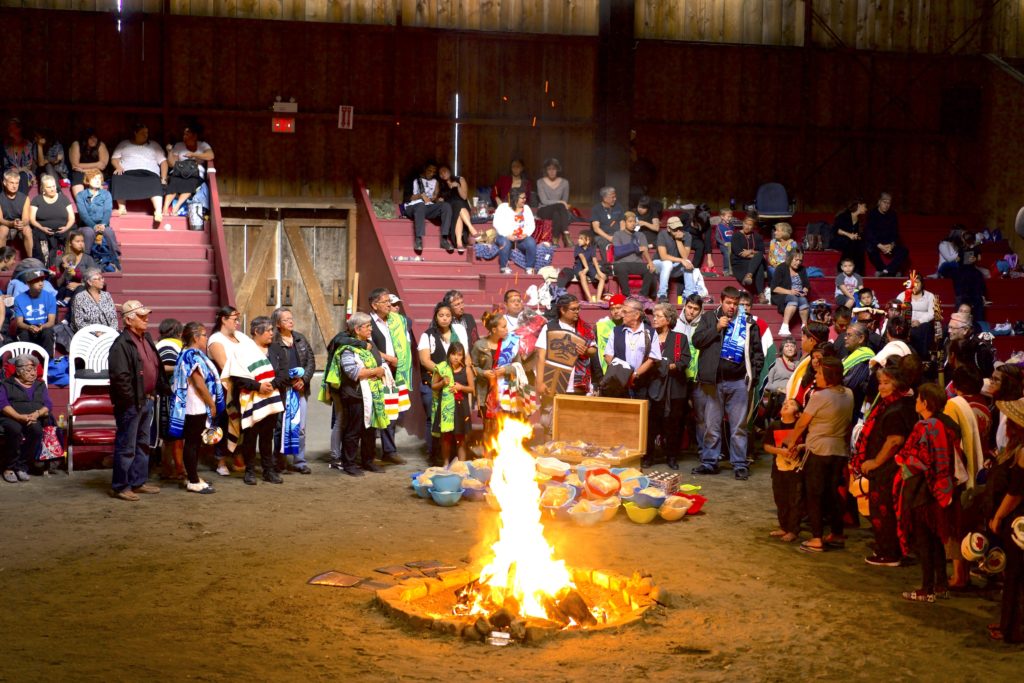